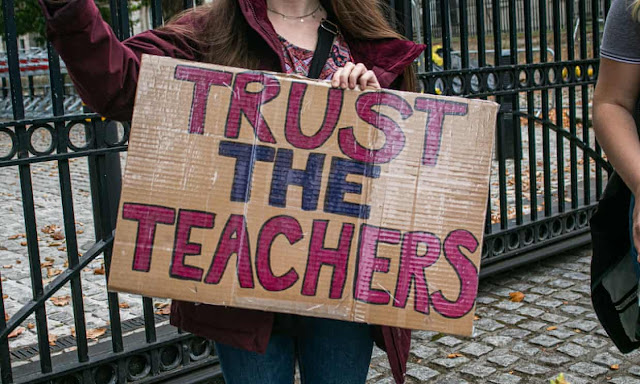 Based on reports from the annual assembly of The Alberta Teachers’ Association held August 13-14, it is apparent that the senior leadership believes that a policy resolution calling for a vote on non- confidence in the Minister of Education could be counter-productive to building an effective working relationship with the government. Rather than simply refusing to acknowledge the long-standing charade of the minister’s so-called consultation with the profession,  ATA officials  are still seeking to have “conversations” and to build a “relationship” with the Minister.

This is the same Minister who did not consult with the ATA when the teachers’ pension funds were to be moved from a dedicated fund manager to AIMCo. The same Minister who rolled back curriculum change without consultation and dismissed the hard work of hundreds of teachers and professors of education who worked to build an innovative new approach to teaching and learning in this province. This is the same Minister whose government cut education budgets that led to school boards scrambling to maintain the positions of 20,000 employees – essential workers who were in the front-lines of supporting Alberta’s students as they faced the uncertainty of the pandemic. The same Minister who just announced a right wing ideologically driven team of advisors to oversee curriculum development, all without consultation with the ATA. Adriana LaGrange is not interested in a genuine and meaningful engagement with the teaching profession, any more than her government is committed to working with Alberta doctors.

To be clear, the proposed vote of non-confidence in the minister was not about individuals or personalities. For the past two decades across Canada, policy analysts have lamented the fact key education decisions flow directly from the party operatives within premiers’ offices, often driven by short-term election cycles and ‘dog-whistle’ messaging on social media. We are familiar with the litany this current government has attempted to mobilize:  class size really doesn’t matter, kids can’t do math, the environmental extremists are taking over our schools. Yet, despite enduring all of this, the ATA is banking on being able to build a strong collaborative relationship with the Minister – something they have not really had since Dave Hancock was Minister twelve years ago. Since that time there have been occasional polite meetings with ministers and the odd press joint conference – none of which could be considered meaningful partnerships. The results for Alberta teachers and students have not been good. Despite being consistently ranked in the top 3-5 jurisdictions in the world for the past 20 years, the UCP has chosen to diminish trust in Alberta’s public education system and marginalize the profession while attempting to activate its base with the red-meat sloganeering advancing parent choice and privatization – all policies that have proven to be abject failures elsewhere.

Now the political leadership of the ATA faces an existential crisis. These emerged at the recent assembly: huge financial challenges and legacy issues such as the cost-overruns on an ill-conceived expansion to its building and growing concerns about the impacts of current programs in terms of actually addressing the material concerns of classroom teachers.  Some teachers want more decisive action, some want a moderate approach and many others are disengaged and powerless - frustrated with no pay increases in the past five years and anxious about the prospect of wage roll-backs. Meanwhile, the ATA has leadership issues – a popular and obviously very competent president, yet the organization continues to flounder with no clear sense of long-term political direction or priorities.

One of the most compelling quotes I fall back on in my strategic foresight consulting and teaching is Margaret Wheatley’s invocation, that “there is nothing more powerful than a community discovering what it cares about.” The same is true for organizations.

If the recent annual assembly of the ATA is any indication, its members need decisive leadership now more than any other time in recent history to decide what it really cares about. Not only are teachers about to be asked to work in unsafe conditions, putting themselves, children and their communities at risk. More importantly in the long-term, they are being asked to go back in time in terms of what they teach and how they teach. Coupled with this are the unfounded assertions that Alberta students, already tested more than any others in the country, need more testing.

Part of the concern of the political leadership of the provincial ATA is that a strike or refusal to work under high risk health and safety conditions would feed into the UCP agenda. The thinking here is that the UCP wants to break unions, break the public trust in unions and professions and to demonstrate that public services like education and health “don’t work” in order to advance their privatization agenda. It’s a risk of course – but the government’s ill-conceived return to school plans are a symptom of a much deeper problem. Individual teachers already have protection under Section 31 of Alberta’s Occupational Health and Safety Act that protects a worker’s right to refuse unsafe work. This law states that workers can refuse work if they believe that worksite conditions are dangerous or that the work constitutes a danger to the worker’s health and safety (or to the health and safety of another worker or person).

There is no question that Adriana LaGrange’s back to school plan (just days away) is a threat to public health, as evidence from around the world makes clear. The real leadership opportunity is not to only to insist on reconsideration of the pandemic planning and to advise its members to refuse to work as is their legal right already. Instead the strategic leadership opportunity for the provincial leaders of the ATA is to work with local presidents and their school representatives to develop a sustained political action plan that stands up for what Alberta students deserve – a quality education for all. The risk is that short-term concessions on the return to school plan offered by this minister and the premier will serve only serve as a distraction from the long-standing issues facing the profession, many of which are shared across the public sector.

Stop trying to snuggle up to the UCP government. Stand up for public education. Confront them. It’s time.

Bits and Pieces - My Blog Archive